In the summer of 2001, we downsized and moved to a new house.  It was move #9….little did we know that we had 5 more moves ahead of us!  Actually, I’m thankful we didn’t know because God gave us the grace we needed each time ~ another post for another time!

So in this house, although smaller, was still a fairly large home and we were very comfortable.  We had downsized because we had started an animation company and were making loads of changes!  For the first few months we were very happy and pleased with the house and believed that God led us there.  I still think he did but that house came with a lot of baggage that we weren’t aware of.  Even the home inspector and appraiser missed it…missed what you ask?

One day our sweet next door neighbor (they owned a local bakery and would bring us amazing french pastries almost every month!!) came over and said that they would appreciate it if we would take care of our bee problem before their dog ended up being stung.  I had no idea what she was talking about.  Bees?  In our house?  So, she asked me to follow her outside and we walked down the side of our home and there they were.  Hundreds of bees flying in and out from a small opening in the siding of our house.  That’s when I realized that I wasn’t losing my mind ~ our bed was on the other side of that same outside wall, and every now and then when I couldn’t get to sleep right away I would hear a buzzing noise!

So, I made some phone calls for bee removal and it is pricey!  And bee relocation was more than double.  Money was super tight…so we didn’t schedule anything right away hoping the problem would go away and we kept praying the neighbor’s dog wouldn’t get stung.  God answered our prayer about the dog….not about the bees!

In the new year we finally had a bee removal company come out and take care of the problem.  Before he started digging around outside, he had to come inside to our bedroom and take a heat measurement of the wall to see how large the hive was.  How large the HIVE WAS????  Say what now?  Thankfully he didn’t have to go through the inside walls because it wasn’t “too big.”

Next thing I know, the guy is dressed in his beekeeper outfit, trudges a few buckets and a huge ladder down the side of the house and off to work he goes.  I asked him to not bag anything until I could take a look at what he found.  Of course, I wanted to take pictures to show Tony and the girls later too. However, what I wasn’t prepared for was how absolutely beautiful that honey was!  It was glorious!

In a moment those bees went from being a nuisance (and a possible danger to pets and my small children) to being one of the most magnificent creatures God engineered.  These little insects that, according to scientist, shouldn’t be able to fly, not only fly but they help to create something as amazing as honey.  A food that has numerous health benefits and bottom line, just tastes good!  God created something so fantastic…and I couldn’t touch it!

That day, the bee-guy removed over 150 POUNDS of bee, hive, and honey into 6 huge plastic bag lined buckets.  I took pictures of the hive, which was almost 2 feet long by a foot wide; I took pictures of the intricately lovely honeycomb too.  I was able to keep a piece of it in a plastic bag and promised the bee-guy that I would NOT take it out of the bag and that I would toss it in the trash after showing the kids and Tony.  We all marveled at this beautiful sight!  Oh, and if we could have kept that honey, I could have passed out a jar of honey for everyone up and down our street, to our entire family, and still probably had enough to keep our little family in honey for years.  It was so sad.

To go through this process once is bad enough….you guessed it! Two years later, they came back and brought some of the Africanized Honey Bee friends with them.  We did not wait once we saw those little guys…”Hello Mr. Bee Removal Guy?  Can you come over again?”  We found out that our house was in direct line with a large bee farm that was over the hill from where we lived.

Okay, so this second time of bee issues….almost 200 POUNDS of bees, hive, and honey.  Yeah…and the honey seemed to glisten in the afternoon sun even more than the time before.  Man, I gotta find those pictures!!

Can you tell I still think about that honey?

It was a brilliant amber color, twinkling in the sunlight.  It was rich and thick and beautiful!  And you could smell how good it was.  If it was bottled up, you could sell it at a Farmer’s Market for a pretty little penny.  It just looked so perfect!  But if I’d eaten any of it, I would most definitely have fallen ill and quite frankly, I would have run the risk of dying because of it.

Because it was a bee-removal process, instead of a bee-relocation process, there were chemicals used to extricate those little honey bees, the hive, and the honey out of my house.  Trust me…it was sad but necessary.

How many times in my life, in your life, have you gone ahead and “eaten the honey?”  You dated someone that was completely wrong for you? You spent money on something that you shouldn’t have? You allowed gossip to spill out of your mouth? You went somewhere you knew you shouldn’t be going?  And that’s just to name a few.

But what about those times when things looked great?!  You wanted something so badly, and believed that after praying about it that it was God’s will that you have what you wanted?  The suffering we go through when we have walked off God’s path for us, when we’ve allowed our pride and desire to blind us, causes pain for ourselves and often times for those around us too.  Don’t be deceived by how good and beautiful something looks ~ it may be tainted so we have to pay attention to where the desire came from or from whom is making the tempting offer.

In the Old Testament, Proverbs warns us in chapter 25, verse 16 & 27, how too much of a good thing will indeed make us sick, (16)“If you have found honey, eat only enough for you, lest you have your fill of it and vomit it.” (27)“It is not good to eat much honey, nor is it glorious to seek one’s own glory.”

I’d say that was pretty clear!

When those “things” become overwhelmingly shiny in the afternoon sun of our minds…that is when those things become a danger to our health ~ spiritually, mentally, emotionally, and yes, sometimes, physically.  Digging into God’s Word and eating the good food of His teaching is what will keep us healthy on many levels!

Psalm 119:103 is proof of this (and proof that God loves honey!!), “How sweet are your words to my taste, sweeter than honey to my mouth!”  There are over 60 verses where honey is referenced as something beyond good…but also something to be wary of having too much!

I would love to encourage you today that as you begin to ponder what that “thing” is in your life…what your “golden honey” looks like…stop looking at it as something that God is keeping from you.  Start looking at it for what the truth of the matter is….God is keeping YOU from that thing because He knows you will get hurt somehow.  He doesn’t want you to get sick, or get stung.  He loves you so very much!  AND…He will still be there to tend your wounds should you decide to go forward with your own plans too.

There is good honey out there ~ BEE patient and God will lead you to greater fulfillment of His riches beyond your wildest imagination! 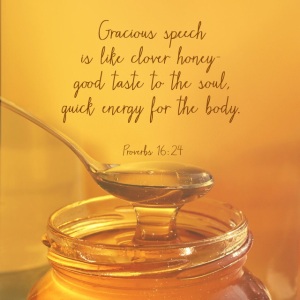 Published by René A. Bancroft

I am a Wife to amazing godly man, and Mom to three beautiful daughters and Mom-in-Law to an amazing young man! I love the Lord and want to share Him with YOU! My heart is with Women's Ministries ~ serving all ages from college Freshman to the Titus 2 woman! I experience great joy in sharing God's Word, and the truth of His promises with all of you! Because I love teaching God's truth so much, I am available to lead your short term bible study, be your "one-day" speaker (retreat or other women's events), or a speaker for your weekend women's retreat. And I love to pray for others ~ so if you have a prayer request, please let me know how I can pray for you! View all posts by René A. Bancroft